As Bradford Smith, deputy general counsel for Microsoft, characterized it in 2001: “By the late 1980s every single company abandoned that approach [copy protection] for the simple reason that legitimate customers did not like it. They found that there were times when they needed to make additional copies: they sold the computer and bought a new one and wanted to move their software, or their hard discs crashed and they needed to reinstall it. And even though at the time worldwide piracy rates for software were in excess of 80% the need to take care of the legitimate 20% of the market place took precedence over trying to deal with the rest. And that same bias very much exists today, I see it all the time when these issues are debated inside Microsoft” (quoted in Katz 2005, requoted in MPEE, p.52).

Close to 80 percent of software installed in 2009 [in Botswana] was pirated, in a country where such cases are continuously on the increase, a statement from Microsoft reads. (Mmegi Online)

Attached to the email was a letter from Microsoft in Namibia explaining how they are doing their best to combat software piracy. It included this:

“Our records suggest that while you have purchased licences of various Microsoft products in the past, there is a possibility that there exists a gap between the actual number of PC’s in your organisation vs. the number of Microsoft Office Suite licences and Client Access Licences for our server products.”

It then asked us to complete a list of all the PCs (No, Microsoft, a plural does NOT have an apostrophe) we own and what Microsoft licences we’re using on each.

My response is two-fold. 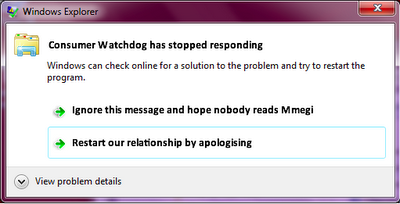 The irony of this situation is that a couple of years ago we were approached by Microsoft’s own anti-piracy division to conduct a survey for them on the use of software in internet cafes. We were also the organisation who told Microsoft about certain stores that were selling pirated versions of their software. We’re the ones who sent them the recordings of the phone conversations we had with the crooks when they offered us pirated versions of all sorts of software. We’re the ones who sent undercover mystery shoppers into the stores at Microsoft’s specific request. We’re the ones they paid to conduct a secret survey of all the internet cafés in Gaborone.

For the record neither Consumer Watchdog [based in Botswana] nor it’s parent company use pirated software. We have a licence for every piece of Microsoft software we use. Which we paid for with real money. Our own. Their statement that their records suggest something to the contrary is unfounded, without evidence and deeply bloody insulting. (Consumer Watchdog: A letter from Microsoft)

The point of this post is not to rub Microsoft’s face in a mistake but to emphasize what a blurry line the company (and many others) walks on licensing, and how wide a zone of toleration it needs around licensing, piracy, and over-installation as part of its business model.  When enforcement becomes too intrusive, legitimate customers get very annoyed.  In practice, this creates a de facto upper bound on enforcement, regardless of what Microsoft could, in principle, do through compliance checks and technical protection measures.  Push too hard and you get open source movements, like in South Africa:

The government began encouraging the use of open source in 2003 when it suffered a severe case of sticker shock. Microsoft presented it with a $74-million bill for 100,000 three-year licenses for operating systems, desktop suites, and Internet technologies….

Some government agencies in South Africa have begun using open source, but most are primarily Microsoft shops. According to Johannesburg’s Business Day, the government is South Africa’s biggest spender on information technology, paying millions of rand per year for software on almost 400,000 PCs. (Owl Institute)

The other point to note here is that Consumer Watchdog is exactly the right size of organization to find itself on the receiving end of high-volume (or robo-generated) enforcement threats.  Larger organizations and public entities are more likely to be addressed through volume licensing deals.  Smaller ones won’t have any legal software, and so operate off the Microsoft radar.  The nastier forms of enforcement–the raids on legitimate businesses and robo-threats of civil litigation–happen predominantly on the middle ground, among organizations that are too formalized to hide, too poor to contest a legal claim, and too small to effectively bargain with the vendor. In the US, the balance is pretty clear:

Here’s how it plays out when you don’t have leverage:

“They call it something awful, but sometimes you grow so fast, you can’t keep control of everything,” said Mike Lozicki, president of MediaLab Ventures LLC of Tampa, Fla., which paid the BSA $125,000. Lozicki said 12 percent of MediaLab’s software was deemed out of compliance, much of it sitting unused. “It was some really obscure stuff,” he said. (AP 2007)

Here’s how it works when you do:

In 2004, Microsoft sponsored an anti-piracy workshop at the prestigious National Law School in Bangalore to “sensitize” members of the judiciary to issues of software piracy. At the end of the workshop, company representatives offered to declare the law school a “piracy-free zone.” A subsequent software audit, however, revealed that only a handful of faculty members used licensed software. The company responded by offering a bulk license to the university at a discounted rate. The discounted price, however, still nearly equaled the annual budget of the library and was rejected by the university. After the university signaled that it would switch to open-source software, the company issued it a free blanket license—and “piracy-free” status. (MPEE, p.391)

Any questions?  Or similar stories?